B.  On 05-24-2010 at 5:30 PM, Charlene Neal, and Senator Pat Neal, gave $10,000.00 to Robin Sue DiSabatino, doing business as “Candidate for Manatee County, Florida, Commissioner” who has been selected to be a public official, with intent to influence Robin Sue DiSabatino, to commit, or aid in committing, or collude in, or allow, any fraud, or make opportunity for the commission of any fraud, such taking money by Extortion from University Park Homeowners, Residents, or Investors, through the creation of the unlawful “University Park Recreation District.” which was unlawfully created by “Seven Corrupted Commissioners” for Manatee County, Florida. 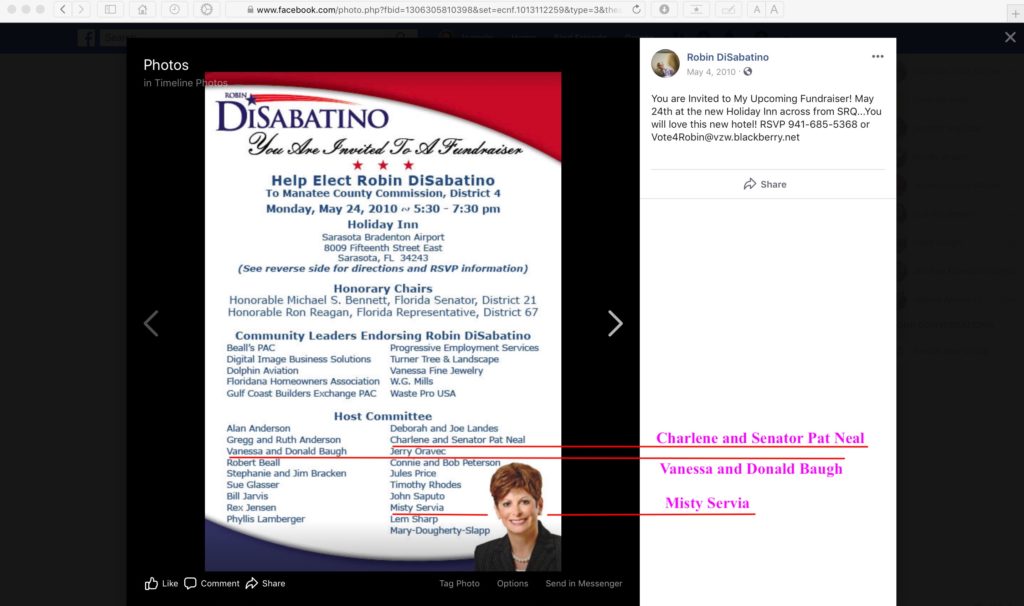 C.  On 04-23-2019 at 10:27 AM, Undeniable evidence, Public Record, James Joseph Moran, filed to preserve authentic evidence, In The Circuit Court Of The Twelfth Judicial District In And For Manatee County, Florida, court case number: 2019-CA-845, wherein first hand conversation with Robin Sue Disabatino, that happened on 04-23-2018 at 10:00 AM; and within Paragraph 6. declared as follows:

“ Commissioner DiSabatino told me “You are wasting your time trying to stop the RD.” She told me “the board (BCC) is corrupt and will give anything he asks for”.I asked her how Neal corrupted the board. She then told me of an incident that took place when she was just beginning her campaign to be on the BCC. She said that Pat Neal invited her to a “get-together to meet some people and to help get her name out.” She gladly accepted. When she arrived at the get-together, Neal told her he raised $10,000.00 for her campaign. He then pointed out a man who he said had contributed $1000. When she went over to thank the man, he said-“Dont thank me, thank Neal. He gives me a lot of work and told me that if I didn’t give you $1000, he wouldn’t give me any work.”…. She then told me about what had recently happened regarding Braden River Preserve where the BCC had found a way to get around a vote by the homeowners so as to give Pat Neal several million dollars of Manatee County taxpayer money.”

D.  On 04-23-2019 at 10:27 AM James Joseph Moran, doing business as victim of Admiralty Court Jurisdiction, to preserve authentic evidence for perpetuity, filed document title: “ANSWER TO COMPLAINT AND OBJECTION TO VALIDATION OF UNIVERSITY PARK RECREATION DISTRICT NON-AD VALOREM ASSESSMENT BONDS IN AN AGGREGATE PRINCIPAL AMOUNT NOT TO EXCEED $24,000,000
You can read more about Robin DiSabatino and the other BCC board members’ corruption on paragraph 6 of the above mentioned document, case Number 2019-CA-845 filed in the Circuit Court of the Twelfth Judicial District, here below is Exhibit.

E.  On 09-03-2019 at 3:03 PM Edward Nicholas doing business as Defacto Circuit Court Judge for the Twelfth Judicial Circuit Court In And for Manatee County, Florida; committed Bribery of public officials and witnesses; Tampering with a witness, victim, or informant; RICO Racketeer, Influenced, and Corrupt Organized; Concealment, Removal or Mutilation Generally; Deprivation Of Rights Under Color of Law; Counterfeiting and Forgery; Extortion; Coercion; Fraud and False Statements; Perjury; Principals; when unlawfully Ordered as follows:

“1. Based on the limited scope of the Court’s inquire in this case, the Motion for Protective Orders and Motion to Limit Discovery as to Plaintiff’s request for the depositions of County Attorney Mitchell O. Palmer, Esq., Chief Assistant County William E. Clague, Esq., Former Manatee County Administrator Ed Hunzeker, Manatee County Director of Building and Development Services, John Barnott, and the current and former elected officials who constitute the Manatee County Board of County Commissioners is GRANTED. 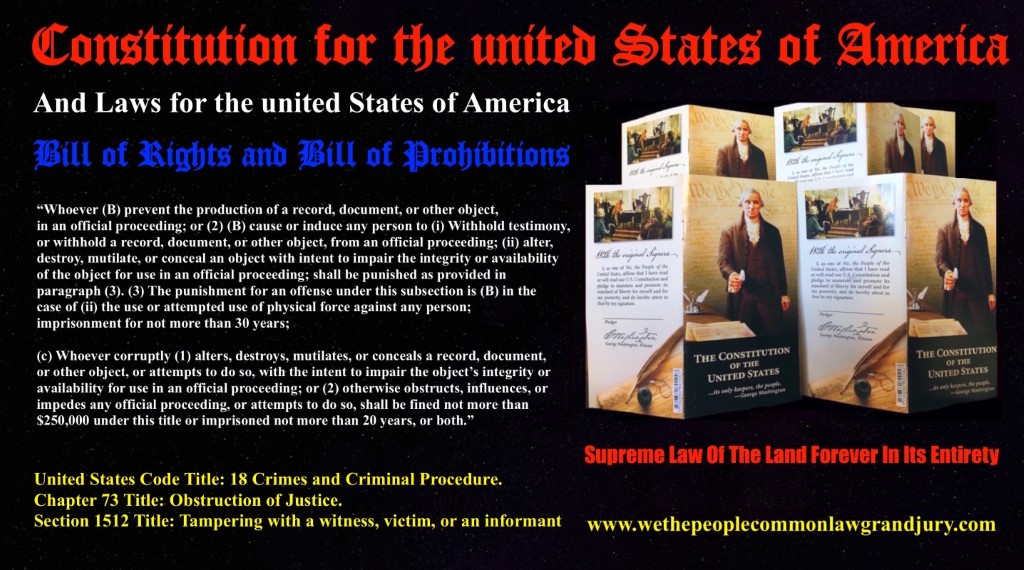 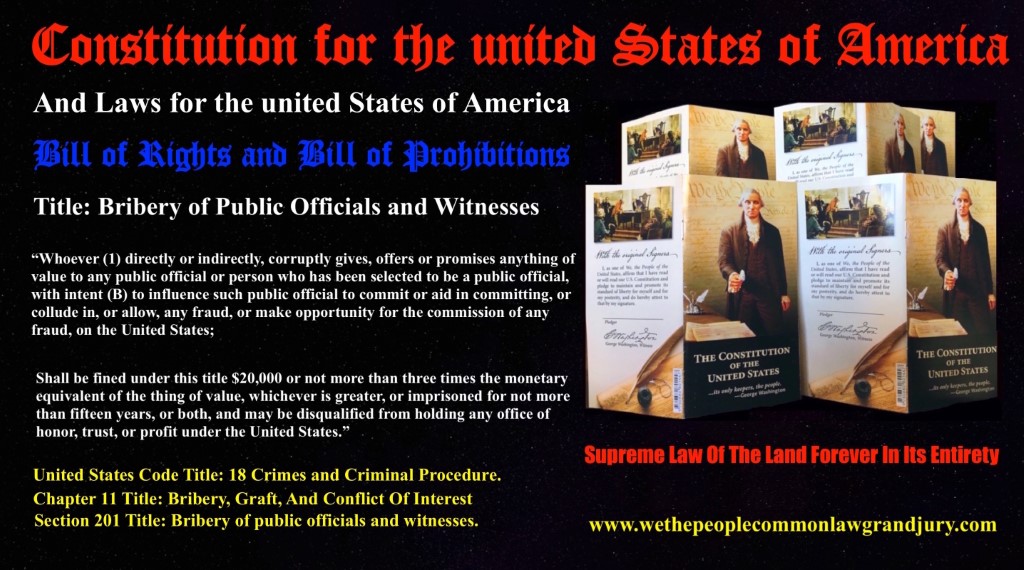 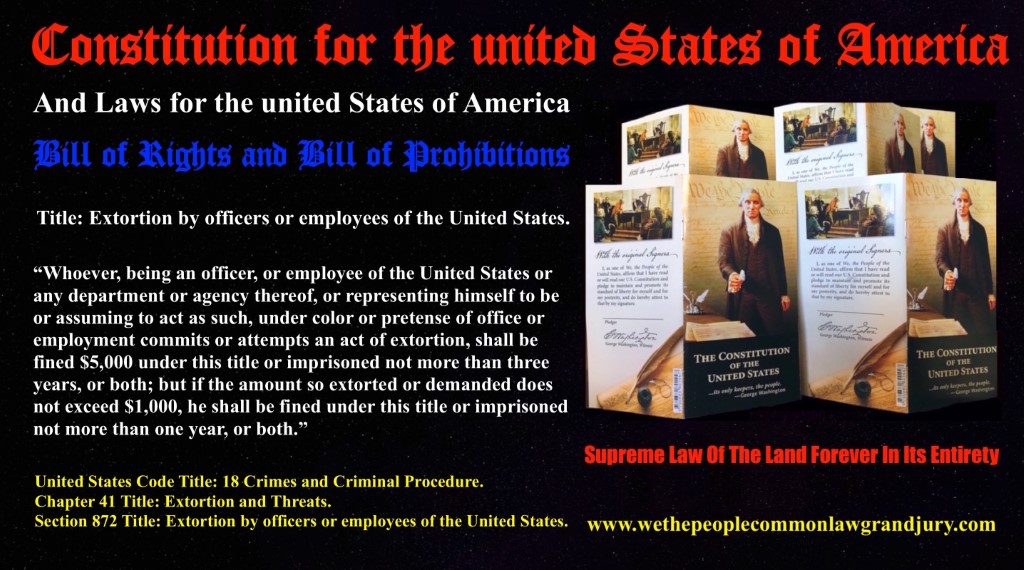 G.  Patrick Neal, currently party to the extortion and unlawfully aiding the creation of the University Park Recreation District. Read more about this case here. 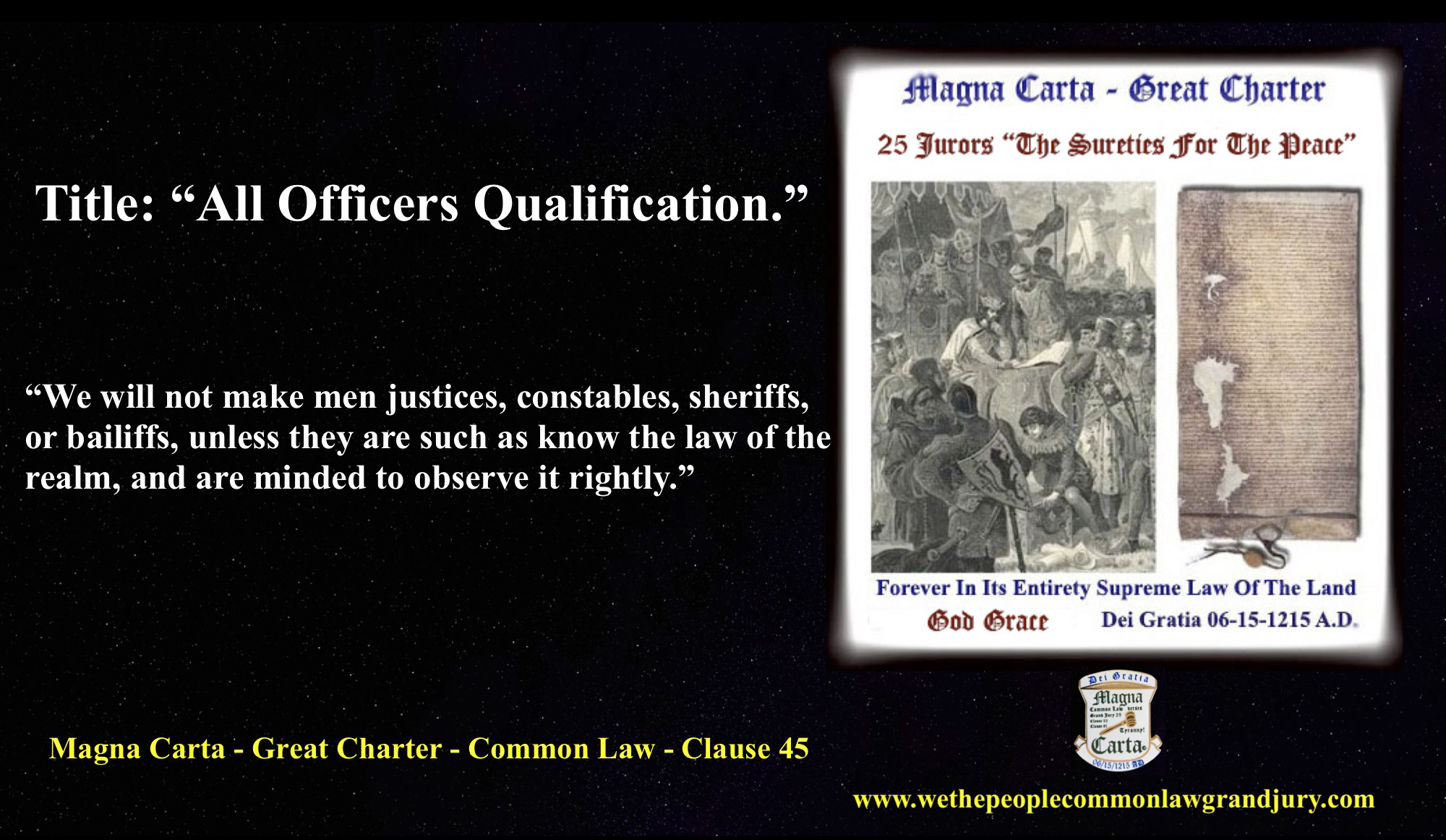 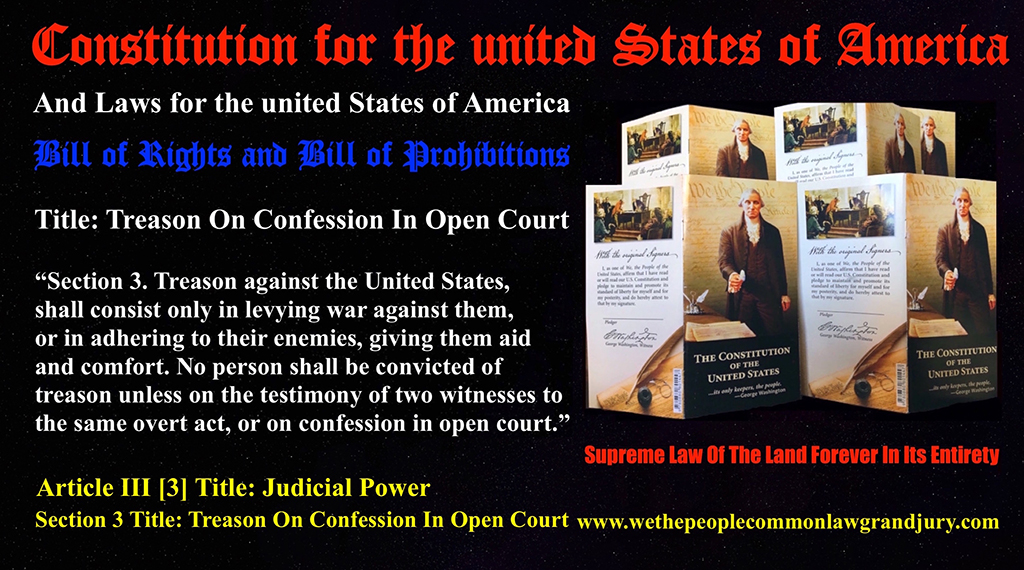 K.   Patrick Neal, Defacto Real Estate Property Developer for Neal Communities Inc., committed multiple Felony crimes, as a result Florida Statutes Title XLVII [47] Criminal Procedure And Corrections. Statute 876 Title: Criminal Anarchy, Treason, And Other Crimes Against Public Order. Section 876.01 Title: Criminal Anarchy, Communism, and other specified doctrines; advocacy prohibited, order as follows: “Criminal anarchy,” “criminal Communism,” “Criminal Nazism,” or “criminal Fascism” are doctrines that existing form of constitutional government should be overthrown by force or violence or by any other unlawful means, or by assassination of officials of the Government of the United States or of several states. The advocacy of such doctrines either by word of mouth or writing or the promotion of such doctrines independently or in collaboration with or under the guidance of officials of a foreign state or an international revolutionary party or group is unlawful. 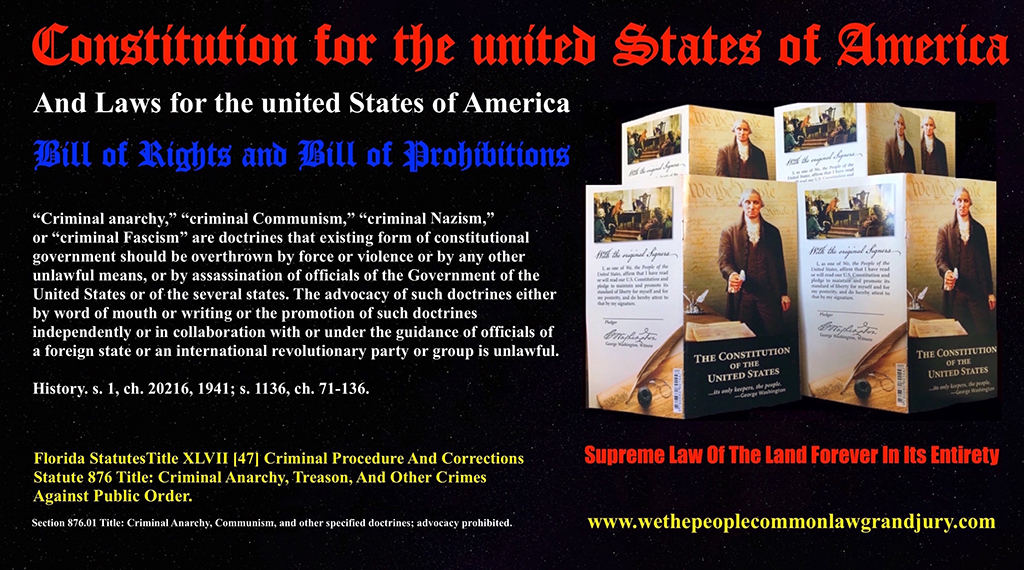 L.  “Criminal anarchy,” “criminal Communism,” “Criminal Nazism,” or “criminal Fascism” are doctrines that existing form of constitutional government should be overthrown by force or violence or by any other unlawful means, or by assassination of officials of the Government of the United States or of several states. 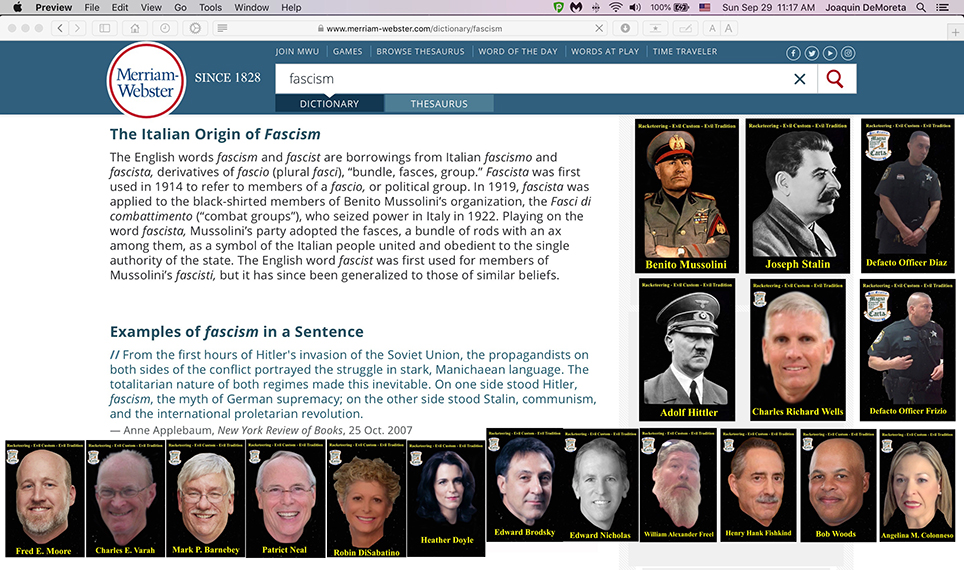